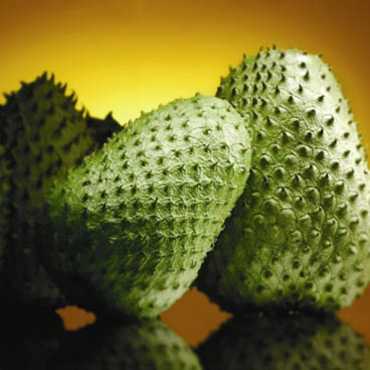 Diabetes mellitus (DM), generally referred to as diabetes, occurs when a person has high blood sugar levels over a prolonged period, resulting in serious health complications. Diabetes is caused because either the pancreas (Type 1 DM) is not producing enough insulin or the body is not responding properly to insulin (Type 2 DM).

Diabetes afflicts more than 380 million people worldwide and the World Health Organization expects this number to more than double by 2030. At today’s level diabetes takes more lives than AIDS and breast cancer combined and is a leading cause of kidney failure, blindness, cardiovascular problems and stroke.

Graviola, or Annona muricata, is a tree native to rain forests in tropical locations. Its fruit is sometimes called soursop and is the main ingredient in a popular Latin American drink. The leaves, fruit and seeds of the graviola tree have been part of herbal medicine for many years. They contain several biologically active ingredients, including phytochemicals called acetogenins that may help prevent spikes in your blood glucose and generally keep your glucose at a steady, even level. The soursop fruit is rich in vitamins and minerals including vitamin B1, B2, and C. It also has potassium, calcium, zinc, phosphorous and magnesium. The stem, bark and leaves are rich in antioxidants particularly Coenzyme Q10 to fight inflammation, eliminate free radicals, and ensure your body is functioning at optimum levels.

Here are some of the main findings from each of the explored research papers:

A study conducted at the University of Yaounde in Camaroon used a group of streptozotocin-induced diabetic rats to test the impact of an Annona muricata plant extract on diabetes. Streptozotocin is a naturally occurring chemical that is particularly toxic to the insulin-producing beta-cells of the pancreas in mammals and is used to induce Type 1 diabetes in animals for the purpose of research. The study demonstrates that injecting diabetic rats with a soursop extract reduced the blood glucose levels in the rats and restored cholesterol and other fats, compared to the untreated diabetic rats. The study concludes that “…the antidiabetic activity of Annona muricata aqueous extract can be explained by its hypolipidemic effect [reduction of lipid fats in the blood], its antioxidant and protective action on pancreatic β-cells, which in turn improve glucose metabolism.”

A similar study from the Department of Anatomy and Cell Biology at the Obafemi Awolowo University in Nigeria finds that soursop possesses anti-hyperglycemic activities. The study was again performed on laboratory rats, where “a significant difference exists between the blood glucose concentrations of treated and untreated hyperglycemic groups of rats.”

Another study from the Obafemi Awolowo University concludes that the beta-cells of pancreatic islets (see next paragraph for definition) of diabetic rats regenerated after treatment with an extract of Annona muricata.

Aside from what we’ve mentioned above, other benefits include:

Graviola is rich in fiber which means that when you consume it regularly, you can expect regular bowel movements. With graviola, you don’t have to worry about constipation and hemorrhoids.

Graviola has properties that keep your body active and energized so you won’t feel lethargic all day.

Graviola is rich in calcium and phosphorous to help strengthen the bones and prevent bone and joint diseases such as osteoporosis.

Because Graviola can aid in proper blood circulation, boost metabolism and prevent damage to your nerves, you will have a better functioning heart and your nervous system will also be less likely to get damaged as you grow older.